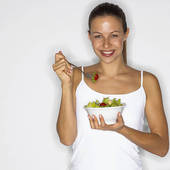 Vegan—Kathy Abernathy says, “No worried….I grow my own healthy food”

Vegetarians are very smart people. Not only because they actually are doing their humane part to save animals from slaughter, but also because so many are now producing their own healthy food.

“Smart” because they stopped trusting and depending on government agencies and their co-conspirators within the global agricultural industry, to provide them with healthy, non-poisoned food products.

Our feature story today could be quite shocking and alarming, but not if you are among the thousands of smart vegetarians who have been following along with this blog on a regular basis.

We have been keeping all our subscribers updated.

And, it would seem too, all our past warnings and updates regarding our unhealthy, industrialized food supply is now coming to fruition.

Due to the artificially inflated, super high auto fuel prices, World food prices are also beginning to skyrocket proportionately. But our smart subscribers, those who have been following along with, us already knew what was afoot.

Those are indeed, the same smart vegetarians to whom I was referring…those who have been getting prepared for the inevitable world crisis a little at a time.

Here is the story we all have been dreading…some more than others.

If you are a meat eater, perhaps it is time to smarten up? This news effects you especially.

Food inflation seen back on the table as prices rise

World food prices are likely to rise for a third

successive month in March, and could gain further beyond that, with expensive oil and chronically low stocks of some key grains putting food inflation firmly back on the economic agenda.

Prices later receded, but an upturn which began in January, initally seen as a pause in the overall downtrend, has persisted.

The United Nations Food and Agriculture Organisation (FAO) will update its monthly Food Price Index on Thursday and the organisation says prices could rise more in the short and medium term as grain supply tightens and energy prices stay high.

“You can see prices in the near term rising even further,” FAO’s senior economist and grain analyst Abdolreza Abbassian told Reuters ahead of the index update.

High crude oil prices have fuelled the upward pressure on inflation since the start of this year. Consumer prices in the 17 nations sharing the euro were up 2.6 percent in March from a year ago, despite stumbling economy.

“The food price index has an extremely high correlation to oil prices and with oil prices up it’s going to be difficult for food prices not to follow suit,” said Nick Higgins, commodity analyst at Rabobank International.

Energy prices affect the production of fertilizers as well as costs related to food distribution and farm machinery use.

“We really saw the (food index) declines in Q4 2019 as being anomalous and related more to sell offs from the threats posed by the European macroeconomic situation rather than agricultural fundamentals,” he added.

The FAO index – which measures price changes for a basket of cereals, oilseeds, dairy products, meat and sugar – rose in February and January.

A U.S. government report last Friday with its lower than expected estimates of grain stocks and falls in soybean and wheat plantings, added to concerns about global grain supplies and fueled a rally in U.S. and European grain futures.

Corn and soybeans are set to be the major drivers on world grain markets until new crops are harvested with strong price swings prompted by weather changes in major producing countries, Abbassian said.

Global Industrial Farming–once thoroughly soaked with poisonous chemicals, the produce is ready to be sold at your local supermarket. Are you Sure Your Vegetables are Safe to Eat?

U.S. soybean futures rose about 7 percent in March and gained about 17 percent in the first quarter of this year spurred by concerns about tight supplies as drought hit South America and smaller U.S. plantings were expected.

On the physical markets, whose prices FAO uses to calculate its food index, the average monthly price of U.S. soybeans jumped to $519.43 a tonne in March from $487.31 a tonne in February, the FAO’s database showed.

But FAO’s Abbassian said prices could still fall in the second half of this year with new crops easing market tension and driving full-year average prices below record levels of 2019.

Now for the BIG question:
Who do you trust more, yourself or your government?